This afternoon, a coalition of 20 higher education networks and associations from around the world have issued a joint public letter expressing grave concern over recent reports of widespread pressures on members of Turkey’s higher education and research community. 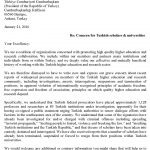 The letter responds to reports that Turkish federal prosecutors have placed under investigation approximately 1,128 scholars, in apparent retaliation for their co-signing a public petition urging Turkish authorities to renew dialogue with factions in the southeastern area of the country. The letter notes that some of the scholars have already been investigated for and/or charged with criminal offenses including spreading “terrorist propaganda,” “inciting people to hatred, violence and breaking the law,” and “insulting Turkish institutions and the Turkish Republic.” Dozens of scholars have reportedly already been detained and interrogated, and suspended or forced to resign from their positions at Turkish higher education institutions.

“Actions reportedly taken against these scholars raise serious concerns not only for [the scholars’] professional and personal well-being, but for the overall well-being of the Turkish higher education and research community, and for the ability of intellectuals and institutions in Turkey to undertake world-class scholarship,” the letter states.

The signatory organizations, including Scholars at Risk, call on Turkish authorities to intervene before any further harm is done to the scholars, their institutions, and to the reputation of Turkey’s higher education and research sector.

“All of our organizations work with institutions and individuals from or within Turkey,” said Robert Quinn, Executive Director of Scholars at Risk. “We deeply value these mutually beneficial ties, and therefore felt it was important to show clear international solidarity with colleagues in the Turkish higher education and research sector in the face of this unprecedented threat.”

The signatories hope that the letter will encourage Turkish officials to end any pending legal, administrative or professional actions undertaken against the scholars concerned and to renew publicly their commitment to internationally recognized principles of academic freedom, freedom of expression and freedom of association.

On March 3, 2016, Turkey’s Minister of National Education Nabi Avci wrote to Scholars at Risk to affirm the Ministry’s commitment to academic freedom while defending investigations and proceedings against scholars who have signed on to the Academics for Peace petition, “We will not be a party to this crime.” View the Minister’s March 3 response to SAR.

On March 31, 2016, Scholars at Risk responded to Minister Avci, reaffirming SAR’s concern over the investigations and proceedings, highlighting that “academic freedom and institutional autonomy demand a presumption that a scholar’s questions and ideas alone cannot be the basis for professional or personal sanction.” The letter urges the Minister to publicly affirm its commitment to academic freedom and to promptly end the investigations and proceedings against the scholars, and offers SAR’s assistance in maintaining a constructive dialogue on these issues. View SAR’s March 31 reply to the Minister.

Scholars at Risk is gravely concerned about sweeping actions against Turkey’s higher education sector, including forced resignations, suspensions, and travel bans, reportedly affecting thousands of individuals, in Turkey and abroad.