Leaders in higher education and human rights will convene for the Scholars at Risk Network’s 2016 Global Congress, Universities in a Dangerous World: Defending Higher Education Communities and Values. 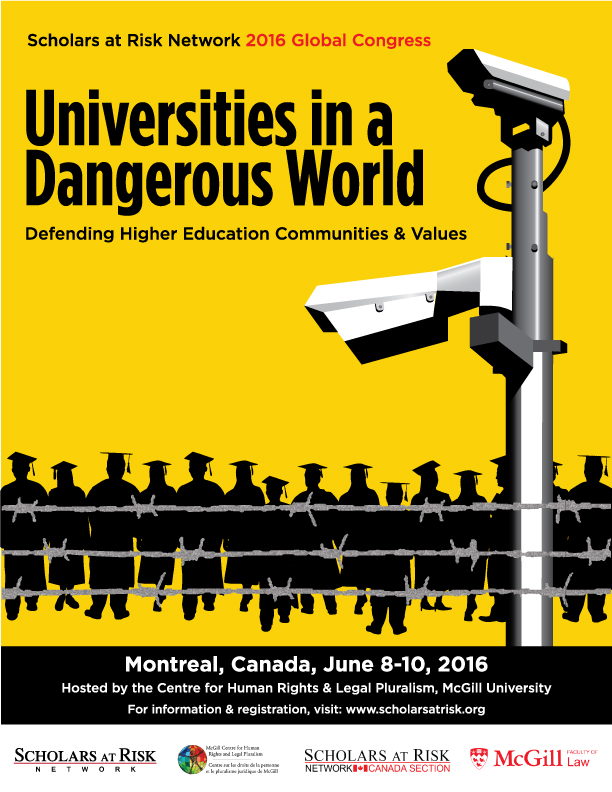 The Congress, to be held in Montreal, Canada from June 8–10 and co-hosted by Scholars at Risk Canada Section, McGill University’s Faculty of Law and Center for Human Rights and Legal Pluralism, will celebrate the 15th anniversary of the SAR Network (SAR).

“Higher education is facing a multitude of challenges, from refugee scholars and students fleeing violence and conflict in Syria and Iraq, to institutions struggling to navigate the complex realities of working in places where academic freedom, autonomy and related values may be limited,” said Rob Quinn, Executive Director of SAR. “The Congress is an opportunity for the Network to come together to learn more about these issues, hear inspirational narratives from SAR scholars and to discuss ways to protect and ultimately strengthen the university space.”

The Congress expects up to 200 university, government and nonprofit leaders, faculty, staff, students and advocates from 25 countries. SAR has announced several prominent speakers, including global higher education leaders such as Adam Habib, of the University of the Witwatersrand in South Africa, John Shattuck, of the Central European University in Hungary, and Lisa Anderson, who recently stepped down as president of the American University in Cairo, and Lloyd Axworthy, of St. Paul’s University College in Canada. The Congress will also highlight the stories of at-risk scholars, including Dr. Emad Shahin, who in 2015 was convicted and sentenced to death in absentia in Egypt due to his research as a political scientist.

For the first time at the biannual event, SAR is presenting opportunities for engagement through a new activity expo, student networking sessions and an introductory meeting for new and interested institutional members. Panel discussions this year will focus on protecting universities and scholars in contexts of conflict and authoritarian regimes, and strengthening the capacity of the university sector to contribute to a more peaceful, just and sustainable world. Select panel topics for this year’s Congress include:

At the 2016 Congress, SAR will present the Courage to Think Defender award. Last bestowed Last bestowed in 2014 to Dr. Habib Kazdaghli, Dean of the Faculty of Letters, Arts and Humanities at the University of Manouba, Tunisia, the award recognizes individuals, groups or institutions that have demonstrated exemplary commitment to protecting scholars and promoting academic freedom and the human rights of higher education communities. SAR expects to announce the recipient in the weeks leading up to the Congress.

Members of the press are invited to contact SAR for registration fee waivers and to arrange interviews with speakers, staff and other attendees. For more information, including registration information, the Congress program and speaker bios, visit www.scholarsatrisk.nyu.edu/Montreal2016 or email Lauren Crain.