On June 9, Scholars at Risk presented the 2016 Courage to Think Defender Award to Egypt’s wrongfully detained students and scholars, in recognition for their commitment to exercising the right to think, share and question ideas despite tremendous risks. The award, which was presented at the 2016 Scholars at Risk Global Congress, was accepted on their behalf by student representatives from SAR members Carleton University, Illinois Wesleyan University, Roger Williams University and the University of Iowa.

“It is an honor to take the stage on behalf of hundreds of scholars and thousands of students who have been imprisoned for peacefully exercising their right to be free to think,” said Abigail DeVeuve, a student from Roger Williams University. “We are inspired by their courage to voice and share ideas while facing one of Egypt’s most staggering crackdowns on dissent.” 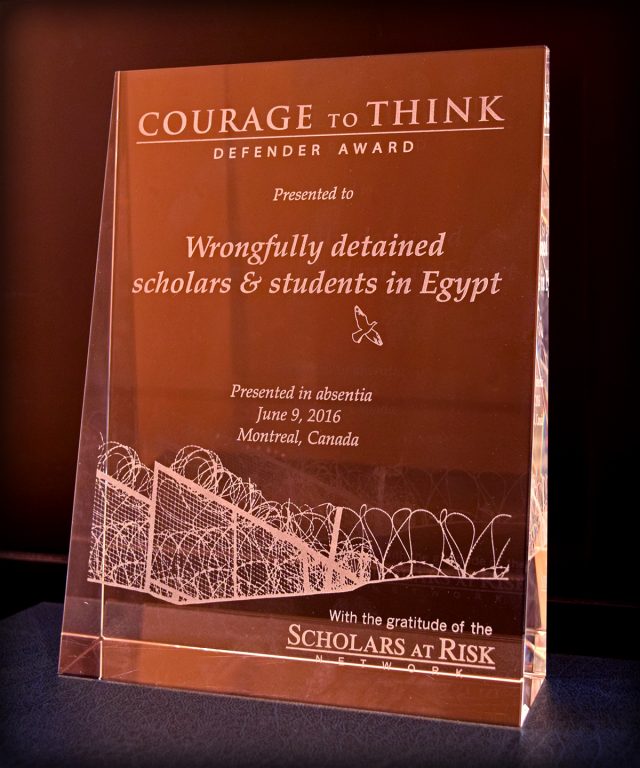 SAR selected student representatives to accept the award in order to recognize their efforts to conduct research and advocacy on behalf of threatened scholars and students around the world. “The students are vital to raising awareness around cases of imprisoned scholars and students like these, and to promoting academic freedom globally and locally,” said Clare Robinson, Advocacy Director at SAR.

Over the past several years, SAR has observed an overwhelming crackdown on Egypt’s higher education community, including the reported use of violence, wrongful prosecutions and imprisonment, professional retaliation and travel restrictions against scholars and students across the country. According to data obtained by the Egyptian NGO, Association for Free Thought and Expression, over 2,000 university students and professors have been detained by security forces since July 2013.

The award was presented during the June 9 Courage to Think Award Dinner, a celebratory event at which SAR recognized the many contributions of its member institutions and partners. The dinner featured remarks by Melanie Adrian, of Carleton University, and a keynote interview of Emad Shahin by Nathalie Des Rosiers, of the University of Ottawa. Professor Shahin is a visiting professor at Georgetown University sentenced to death in Egypt in abstentia.

SAR has presented the award only twice before, in 2011 to Aryeh Neier for his long career dedicated to free inquiry and expression including as the chair of the American Civil Liberties Union, Human Rights Watch and the Open Society Foundations, and in 2015 to Dean Habib Kazdaghli of Manouba University in Tunisia for defending his university from extremist pressures after the Arab Spring, including in the face of prosecution and death threats.

Watch the reception, including the interview with Emad Shahin, below: 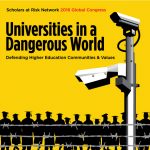 The Congress is an opportunity for the Network to come together to learn more about these issues, hear inspirational narratives from SAR scholars and to discuss ways to protect and ultimately strengthen the university space.”

The SAR Network 2016 Global Congress will celebrate the 15th anniversary of the Scholars at Risk Network and the collective efforts of network members and partners protecting scholars and promoting academic freedom worldwide.