When the Assad government wanted to silence them, Naila Al-Atrash, a theatre director, Radwan Ziadeh, an intellectual, and Sana Mustafa, a student organizer, refused to stop making their voices heard. They organized, they protested, they made art. 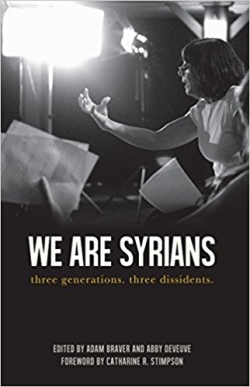 Editors Adam Braver and Abby DeVeuve have collected these three personal stories not only to show the purpose of peaceful dissent, but also “to provide a full chronological account of the repressive Assad regime and citizens’ efforts to advance democracy.” (Foreword Reviews) We Are Syrians offers important and unique perspectives in a world still dealing with violence in Syria, hostile attitudes toward Middle Eastern refugees, and unease at governments’ shifting stances toward free speech.

Naila Al-Atrash is the granddaughter of the famed general Sultan Pasha Al-Atrash, hero of the first Syrian revolution. Her plays have been banned numerous times by the Assad government. Radwan Ziadeh, one of the prominent intellectuals in the first Damascus Spring in 2000, is currently one of the most wanted men by both ISIS and the Assad government. Sana Mustafa is a university student who took part in, and organized, many of the early peaceful protests against the Assad regime.

Scholars at Risk, an international network that protects scholars and academic freedom, helped with the formation of We Are Syrians, while also providing support to the scholars profiled. The concept for the book grew out of a Roger Williams University Student Advocacy Seminar, an undergraduate service-learning course that partners with Scholars at Risk to provide students with practical human rights advocacy experience. All author proceeds are donated to Scholars at Risk’s Emergency Fund.

Adam Braver, a novelist, is on faculty at Roger Williams University and editor of the Broken Silence series for UNO Press. Abby DeVevuve earned her BA at Roger Williams, where she worked with the Scholars at Risk Network and participated in the Student Advocacy Seminar. She currently works at Cengage Learning.

Start a Student Advocacy Seminar on your campus!

SAR invites expressions of interest from faculty members and institutions interested in holding a Student Advocacy Seminar on campus. Through these seminars, SAR offers students the opportunity to develop human rights research and advocacy skills through direct engagement on behalf