Join Scholars at Risk in taking action on behalf of Dr. Ahmadreza Djalali, a peaceful scholar sentenced to death in Iran.

A scholar of disaster medicine, Dr. Djalali is facing execution in Iran in apparent retaliation for refusing to spy on his academic colleagues in Europe. Originally arrested in April 2016 while attending academic conferences in Iran, Dr. Djalali was sentenced to death on October 21, 2017 and the sentence was affirmed without appeal on December 9, 2017. Dr. Djalali is affiliated with several European universities and is a permanent resident of Sweden, where his family currently resides. According to his wife, Dr. Djalali’s health is failing and has been denied crucial medical care. Now more than ever, we must keep his name in the headlines and in the minds of state officials as much as possible.

Under these extraordinary circumstances, SAR calls on the international higher education community to voice its support for Dr. Djalali by taking one or more of the below actions: 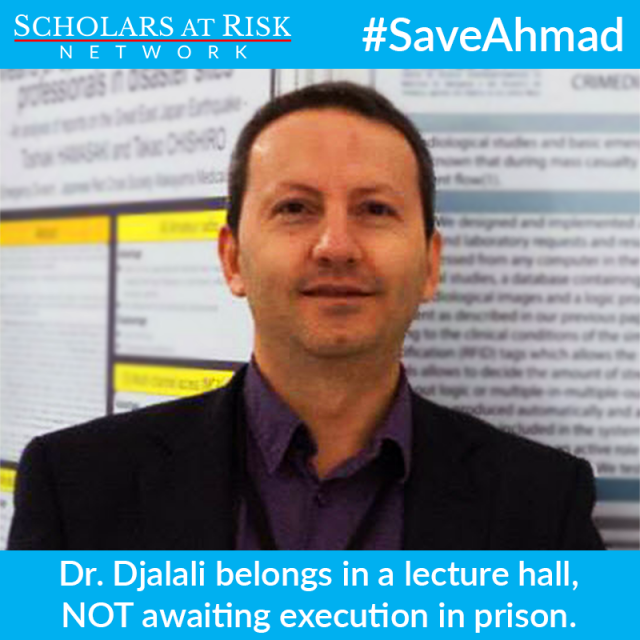 Use this graphic and the hashtag #SaveAhmad to help flood social media with images of Dr. Djalali.

1) Speak out on social media

SAR is campaigning on Dr. Djalali’s behalf on social media, and we need your help to spread the word. Please send tweets to your Ministry of Foreign Affairs and/or Permanent Representative to the UN asking,

Increase your impact by calling the Iranian diplomatic mission in your country to press for more information about Dr. Djalali’s situation and to respectfully urge his release. For more information, consult our call sheet with the relevant phone numbers and a suggested script.

3) Write an opinion piece in support of Dr. Djalali

If 140 characters isn’t your style, consider writing an op-ed regarding Dr. Djalali’s case for publication in your university, local, or national press. SAR would be happy to provide you with the necessary case information and latest updates as events unfold.