The authorities in the United Arab Emirates (UAE) should reveal the whereabouts of prominent human rights defender and citizen-journalist Ahmed Mansoor and release him immediately and unconditionally, over two dozen human rights organisations said today. He is being held for his peaceful human rights work. 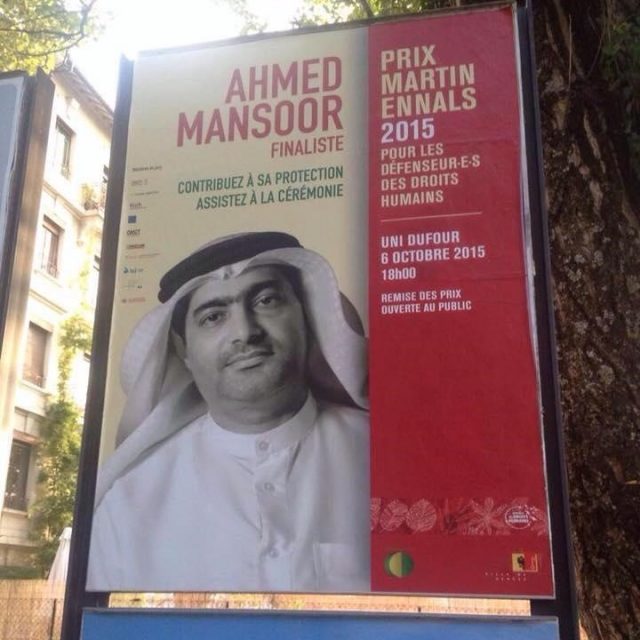 March 20, 2018 marks one year since security forces arbitrarily arrested Mansoor, winner of the Martin Ennals Award for Human Rights Defenders in 2015, at his home in Ajman. The UAE authorities have continued to detain him in an unknown location, despite condemnation from UN human rights experts and independent human rights organisations.

“The authorities have subjected Ahmed Mansoor to enforced disappearance since his wife last saw him in September 2017. They must reveal his whereabouts to his family and grant him regular access to them and to a lawyer of his choosing,” said Khalid Ibrahim, Executive Director of the Gulf Centre for Human Rights (GCHR).

Following his arrest on March 20, 2017, the authorities announced that he is facing speech-related charges that include using social media websites to “publish false information that harms national unity.”

On March 28, 2017, a group of UN human rights experts called on the UAE government to release Mansoor immediately, describing his arrest as “a direct attack on the legitimate work of human rights defenders in the UAE.” They said that they feared his arrest “may constitute an act of reprisal for his engagement with UN human rights mechanisms, for the views he expressed on social media, including Twitter, as well as for being an active member of human rights organisations.”

“Mansoor’s arbitrary detention is a violation of his right to freedom of expression and opinion. The UAE authorities must drop all charges against him and release him immediately,” said Carles Torner, Executive Director of PEN International.

Since his arrest, Mansoor has not been allowed to make telephone calls to his family and has been allowed only two short visits with his wife, on April 3 and September 17, 2017, both under strict supervision. He was brought from an unknown place of detention to the State Security Prosecutor’s office in Abu Dhabi for both visits. The authorities have refused to inform his family about his place of detention and have ignored their requests for further visits.

In February 2018, a group of international human rights organisations commissioned two lawyers from Ireland to travel to Abu Dhabi to seek access to Mansoor. The UAE authorities gave the lawyers conflicting information about Mansoor’s whereabouts. The Interior Ministry, the official body responsible for prisons and prisoners, denied any knowledge of his whereabouts and referred the lawyers to the police. The police also said they had no information about his whereabouts. The lawyers also visited Al-Wathba Prison in Abu Dhabi following statements made by the authorities after Mansoor’s arrest, which suggested that he was held being held there. However, the prison authorities told the lawyers there was nobody matching Mansoor’s description in the prison.

“Instead of protecting Mansoor, the authorities have detained him for a year with hardly any access to his family and no access to a lawyer of his choosing. Their contempt for human rights defenders and brazen disregard for their obligations under international human rights law is truly shocking,” said Sima Watling, UAE Researcher at Amnesty International’s Middle East Regional Office.

A dozen security officers arrested Mansoor at his home in Ajman in the pre-dawn hours of March 20, 2017 and took him to an undisclosed location. The security officials conducted an extensive search of his home and took away all of the family’s mobile phones and laptops, including those belonging to his young children.

The authorities refused to disclose any information about Mansoor to his family, who had no information about him until a statement was issued on the Foreign Affairs Ministry’s website on March 29, 2017 claiming that he was in detention in the Central Prison, also known as Al-Wathba, in Abu Dhabi. But the authorities have failed to confirm his place of detention to his family.

Since his arrest, according to informed sources, Mansoor is believed to have been held in solitary confinement without any access to a lawyer of his choosing. Prolonged and indefinite solitary confinement can amount to torture or other cruel, inhumane, or degrading treatment under international human rights law. Human rights organisations have also received reports from informed sources that Mansoor may be being subjected to other forms of torture or ill-treatment in detention.

The UAE authorities have said in their public statements that Mansoor is accused of using social media websites to “publish false information that harms national unity.” The UAE’s official news agency, WAM, said on the day of his arrest that he is also accused of using social media websites to “promote [a] sectarian and hate-incited agenda;” and “publish false and misleading information that …damages the country’s reputation.”

The statement classified these as “cybercrimes,” indicating that the charges against him may be based on alleged violations of the UAE’s repressive 2012 cybercrime law, which authorities have used to imprison numerous activists and which provides for long prison sentences and severe financial penalties.

In the weeks leading up to his arrest, Mansoor had used Twitter to call for the release of the human rights activist Osama Al-Najjar, who remains in prison despite having completed a three-year prison sentence in March 2017 for his peaceful activities on Twitter; as well as the release of prominent academic and economist Dr Nasser bin Ghaith, sentenced in March 2017 to 10 years for his Twitter posts. Mansoor had also used his Twitter account to draw attention to human rights violations across the Middle East region, including in Egypt and Yemen. He had also signed a joint letter with other activists in the region calling on Arab League leaders, meeting in Jordan in March 2017 for the Arab Summit, to release political prisoners in their countries. He also has a blog, which he used to write on various topics, including articles about the human rights violations that he is subjected to because of his peaceful activities, as well as about the situation of freedom of expression and prisoners of conscience in the UAE.

Mansoor is a member of GCHR’s Advisory Board and a member of the advisory committee of Human Rights Watch’s Middle East and North Africa Division.

The mission to locate Mansoor was sponsored by GCHR, the Martin Ennals Foundation, Front Line Defenders, the International Service for Human Rights (ISHR), as well as FIDH and the World Organisation Against Torture (OMCT), under their partnership, the Observatory for the Protection of Human Rights Defenders.

The undersigned human rights organisations call on the UAE authorities to:

Authorities in the United Arab Emirates should immediately release Ahmed Mansoor, an award-winning human rights defender who is facing charges that violate his right to freedom of expression, a coalition of 18 human rights organizations said today, one month after