Berlin, Germany – Scholars at Risk (SAR) has announced Turkey’s Academics for Peace (Barış İçin Akademisyenler) as recipients of the 2018 Courage to Think Defender Award, for their extraordinary efforts in building academic solidarity and in promoting the principles of academic freedom, freedom of inquiry, and the peaceful exchange of ideas. The award, which will be presented at the Scholars at Risk Network 2018 Global Congress, will be accepted on behalf of the group by Muzaffer Kaya, of Technische Universität Berlin, and Tebessüm Yılmaz, of Humboldt-Universität zu Berlin.

“We have been deeply impressed by the organizing efforts of Academics for Peace,” said Rose Anderson, SAR’s Director of Protection Services. “By connecting their threatened colleagues both inside and outside of Turkey to resources, opportunities, and support, they are working to ensure that Turkey’s vibrant higher education community can continue to pursue scholarship, and be free to think, question and share ideas. The solidarity of the Academics for Peace community is an inspiration for all of us who work on behalf of threatened scholars and academic freedom worldwide.”

The Scholars at Risk Network Courage to Think Award is given to individuals or groups; to those who have experienced threats personally, those who have worked to assist them, or those who work to promote wider understanding of, and respect for, academic freedom and related values.

This year’s award is presented to Academics for Peace for the courage and dedication of its members in defending academic freedom and the rights of the higher education community. Specifically, the award recognizes Academics for Peace’s efforts to build solidarity among scholars inside and outside of Turkey, share vital information, and organize material support for colleagues who have lost of their positions, their livelihoods and, in some cases, their liberty, in retaliation for peaceful, expressive activity. The nomination is a specific recognition of Academics for Peace’s solidarity work, and at the same time a general recognition of the current pressures on all scholars, students and higher education institutions in and from Turkey.

Previous recipients of the Courage to Think Award include:

The award will be presented during the Scholars at Risk Network 2018 Global Congress Courage to Think Award Dinner at the Berlin Congress Center on April 25. The dinner is a celebratory event at which SAR will recognize the many contributions of its member institutions and partners.

The Global Congress is a biennial event that brings the SAR network together to share experience and set an advocacy agenda for the coming years. The 2018 Congress is a joint venture of Scholars at Risk, the Alexander von Humboldt Foundation— whose Philipp Schwartz Initiative (PSI) has provided research fellowships for over 120 at-risk scholars at German institutions since 2015 and which hosts the secretariat of the SAR-Germany Section—as well as long-time SAR member Freie Universität Berlin.

The 2018 Global Congress is held in the center of Europe at a time of historic challenges not only to higher education, but to liberal democratic society in general. These include the ongoing conflicts in Ukraine, Syria, Iraq, and beyond; the resulting refugee crises; the resurgence of populism, authoritarianism, and ethnic nationalism; and related attacks on higher education ranging from the targeted pressures on Central European University to the firing of over 5,800 academics in Turkey, to travel restrictions and widely publicized unrest on U.S. campuses.

The theme of the 2018 Global Congress, The University and the Future of Democracy, reflects that democratic values themselves are under pressure. It also indicates that even more so, the university in the sense of the scholarly community as a whole, has a role—a responsibility—to develop, explain, and defend these values.

For more information about the Courage to Think Award and the Global Congress, including registration information, the Congress program and speaker bios, visit https://www.con-gressa.de/gc2018 or email Annabelle Wilmott at annabelle.wilmott@nyu.edu.

About Scholars at Risk: Scholars at Risk (SAR) is an international network of higher education institutions and individuals working to protect threatened scholars, promote academic freedom and prevent attacks on higher education communities around the world since 2000. SAR protects scholars suffering grave threats to their lives, liberty and well-being by arranging positions of sanctuary for those forced to flee, and advocating for scholars facing prosecution, imprisonment or other restrictions through the Scholars-in-Prison Project. SAR’s Academic Freedom Monitoring Project identifies and reports attacks on higher education to protect vulnerable scholars and students, hold perpetrators accountable and prevent future violations. Institutions or individuals interested in learning more about SAR and its activities should visit www.scholarsatrisk.org or email scholarsatrisk@nyu.edu. 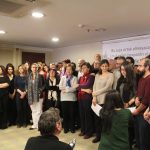 After signing a peace petition in January 2016, a growing number of scholars faced criminal charges and prosecutions. After July 26, 2019, when Turkey’s Constitutional Court ruled in favor of the peace petition signatories, hundreds of academics were reportedly acquitted.