Berlin, Germany | May 3, 2018 – The Scholars at Risk (SAR) Network 2018 Global Congress, The University and the Future of Democracy, was held in Berlin April 23-26 as a joint venture of Scholars at Risk, the Alexander von Humboldt Foundation, and Freie Universität Berlin.

The Global Congress is a biannual gathering to discuss current threats to scholars and universities around the globe, and to mobilize SAR network members to better understand and defend academic freedom. The 2018 Global Congress brought together in Berlin over 500 participants from more than 60 countries for four days of workshops, keynotes, and panel discussions around the theme, The University and the Future of Democracy. “Not only wars and crises, but also autocratic governments are increasingly curtailing the freedom of the arts, science and opinion worldwide. We are working to combat this with a foreign cultural relations policy that establishes and protects such freedom…” explained the German Federal Foreign Minister Heiko Maas in a post-Congress statement.  The German Federal Foreign Office partners with Congress co-organizer the Alexander von Humboldt Foundation on the Philip Schwartz Initiative, which assists threatened scholars in Germany.  The Humbolt Foundation also hosts the secretariat of the SAR Germany Section, which includes over 40 higher education institutions in Germany participating in the global SAR network.

2018 Global Congress highlights included keynote remarks from Prof. Dr. Judith Butler, of the University of California, Berkeley, Prof. Dr. Markus Hilgert, Director of the Ancient Near East Museum at the Pergamonmuseum, and Justice Prof. Dr. Susanne Baer of the Federal Constitutional Court of Germany. In her remarks issuing a “Berlin call” for university ethics, Justice Baer noted that “academic freedom and institutional autonomy are key…to a democratic society.” How universities respond to scholars at risk, she said, is a “litmus test of its practice, and its ability to contribute to democracy at all.”

A plenary panel featuring Prof. Liviu Matei, Provost and Pro-Rector of Central European University (CEU) echoed this theme by sharing the latest developments in Hungary and the international response to legislative threats to CEU.  Other sessions highlighted challenges for scholars and students around the world, including in China, India, Egypt, Russia, Venezuela and the United States, among others. Other panels featured forward-looking strategies for responding to attacks on higher education communities and model programs for supporting at-risk scholars and students.

The event also included the Courage to Think Award Dinner, during which Turkey’s Academics for Peace (Barış İçin Akademisyenler) received the Scholars at Risk Network 2018 Courage to Think Defender Award for their “extraordinary efforts in building academic solidarity and in promoting the principles of academic freedom, freedom of inquiry, and the peaceful exchange of ideas.”

About Scholars at Risk: Scholars at Risk (SAR) is an international network of higher education institutions and individuals working to protect threatened scholars, promote academic freedom and prevent attacks on higher education communities around the world since 2000. SAR protects scholars suffering grave threats to their lives, liberty and well-being by arranging positions of sanctuary for those forced to flee, and advocating for scholars facing prosecution, imprisonment or other restrictions through the Scholars-in-Prison Project. SAR’s Academic Freedom Monitoring Project identifies and reports attacks on higher education to protect vulnerable scholars and students, hold perpetrators accountable and prevent future violations. Institutions or individuals interested in learning more about SAR and its activities should visit www.scholarsatrisk.org or email scholarsatrisk@nyu.edu. 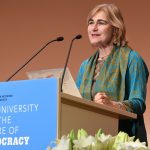 The Scholars at Risk Network's 2018 Global Congress was held in Berlin, Germany, 23-26 April, 2018, in partnership with the Alexander von Humboldt Foundation, Freie Universität Berlin, and Scholars at Risk Germany Section.