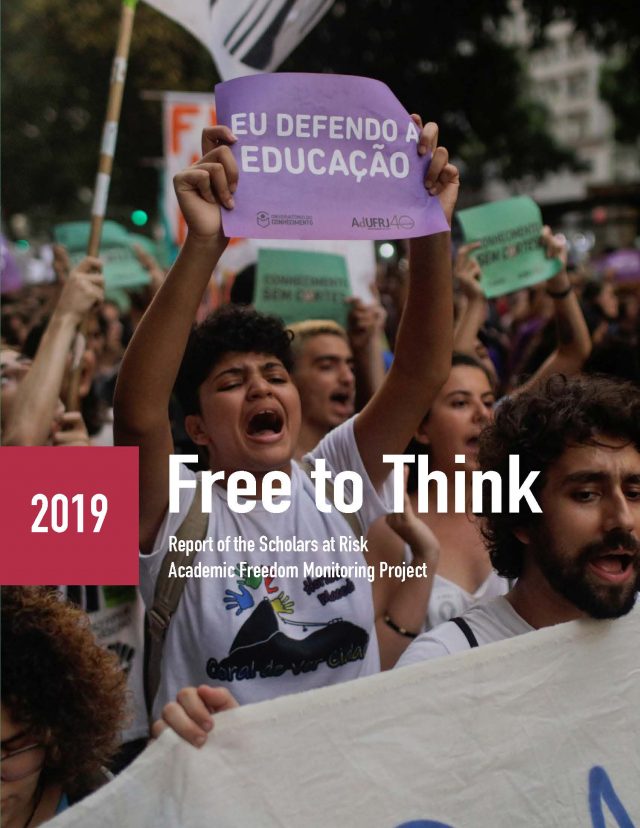 New York, NY — Scholars at Risk announces the release of Free to Think 2019, a report analyzing 324 attacks on higher education communities in 56 countries between September 1, 2018 and August 31, 2019.

“Attacks on higher education communities — regardless of their location, scale, or scope — hold consequences for societies everywhere,” says SAR’s Executive Director, Robert Quinn. “In our increasingly interconnected world, these attacks erode an essential, global space where academics, students, and the public at large can come together to understand and solve the complex problems that are affecting us all.”

Free to Think 2019 draws on data from SAR’s Academic Freedom Monitoring Project to identify trends related to violent attacks on higher education communities, including a series of deadly bombings targeting scholars and students in Afghanistan; wrongful imprisonments and prosecutions of scholars, particularly in Turkey and Sudan; pressures on student expression involving more than one hundred documented incidents around the world; and restrictions on academic travel, deployed most prominently by authorities in the U.S., Israel, and China. The report provides detailed analysis of national pressures on higher education communities, including:

JOIN SAR: Higher education institutions are invited to inquire about SAR’s work and about joining the SAR network by visiting https://www.scholarsatrisk.org/join/ or emailing scholarsatrisk@nyu.edu.