UPDATE (December 2, 2020): Iranian authorities have reportedly postponed the execution of the death sentence and have not transferred Dr. Djalali to Rajai Shahr Prison. Scholars at Risk (SAR) understands that pressure from the international community contributed to the stay in the execution. SAR continues to urge governments, higher education and human rights communities, and civil society to demand Dr. Djalali’s freedom.

“Iranian authorities must drop the death sentence and secure Dr. Djalali’s immediate release,” says SAR Advocacy Director Clare Robinson. “The government’s treatment of Dr. Djalali is nothing short of appalling and demands the attention of the international community.”

According to Amnesty International, Dr. Djalali was to be transferred to the Karaj-based prison in the late afternoon, local time, on December 1. According to the rights group, Dr. Djalali was barred from seeing his family and lawyer at the order of state authorities. This raises concerns that authorities may carry out his execution in secret. However, Dr. Djalali’s lawyer has reportedly been informed by the judge that he will be allowed to see family one last time before the death sentence is carried out.

Ms. Robinson says that the execution of Dr. Djalali would be a brazen attack on higher education, academic freedom, and other fundamental human rights that Iran must uphold. “As a specialist in emergency medicine, Dr. Djalali has a crucial role to play in the global response to the COVID-19 pandemic. We demand his freedom so that he can rejoin his family and resume his important research and teaching from which we all stand to benefit.”

Dr. Djalali is an Iranian-Swedish scholar who teaches at Karolinska University, in Sweden. He has held similar positions at the Università degli Studi del Piemonte Orientale, in Italy; and Vrije Universiteit Brussel, in Belgium. In April 2016, Iranian authorities arrested Dr. Djalali during a trip to Iran to participate in a series of academic workshops. On October 21, 2017, Dr. Djalali was sentenced to death for “corruption on earth,” based on unsubstantiated allegations that he had provided intelligence to the Israeli authorities. Dr. Djalali has disputed the allegations, asserting that his ties to the international academic community are the basis of his prosecution. SAR understands that Dr. Djalali has been denied the right to appeal the conviction and sentence, and has suffered from torture, ill-treatment, and a growing number of medical complications while in state custody.

About Scholars at Risk: Scholars at Risk (SAR) is an international network of over 500 higher education institutions and thousands of individuals in 39 countries that is leading the charge in protecting and offering sanctuary to threatened scholars and students. SAR’s mission is to protect higher education communities and their members from violent and coercive attacks, and by doing so to expand the space in society for reason and evidence-based approaches to resolving conflicts and solving problems. SAR meets this mission through direct protection of individuals, advocacy aimed at preventing attacks and increasing accountability, and research and learning initiatives that promote academic freedom and related values. SAR’s Academic Freedom Monitoring Project identifies and reports attacks on higher education to protect vulnerable scholars and students, hold perpetrators accountable, and prevent future violations. Learn more by emailing scholarsatrisk@nyu.edu. 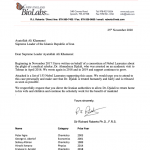