Scholars at Risk (SAR) is concerned that pressures on Hong Kong’s higher education communities have, over recent months, escalated at a rate that threatens scholars and students and risks irreversible damage to the region’s universities. SAR calls on government and university authorities to promote and safeguard the rights of students and academics, and refrain from actions that undermine academic freedom and institutional autonomy.

While pressures on the local higher education community had been building over several years, these pressures increased substantially in June 2020, when China’s Central Government imposed on Hong Kong a sweeping National Security Law (NSL). Scholars and higher education associations immediately expressed concerns that the NSL would compromise research, the exchange of ideas, and international collaborations. Recent developments have proven those concerns well founded.

At least one hundred people have been arrested under the vague and overbroad terms of the NSL, with most targeted for their alleged participation in Hong Kong’s pro-democracy movements, political activity, or other expression critical of Beijing. Among the arrested are members of the higher education community, including legal scholar Benny Tai, part-time lecturer Claudia Mo, and numerous students.

Higher education institutions have quickly moved to implement the NSL on campus, in ways that erode academic freedom. On February 25, the Chinese University of Hong Kong (CUHK) cut ties with its newly elected student union, citing remarks about the NSL by then-candidates of the union cabinet as potentially violating the NSL. Members of the student union ultimately resigned after they and their families began receiving death threats following the administration’s decision. Officials at CUHK and the University of Hong Kong have also taken aim at campus events, including canceling a photo exhibition and pressuring students to call off a film screening, fearing violation of the NSL. Most recently, on March 5, Hong Kong’s Education Secretary reportedly told members of the Legislative Council that universities should conform curricula to the NSL, promote national security education through courses and seminars, and “suppress” activities that violate the NSL. 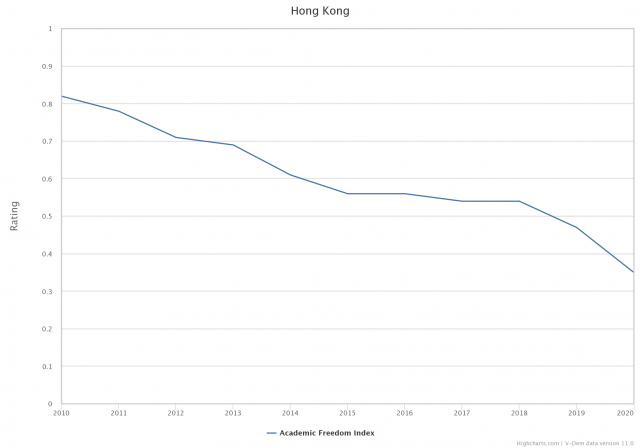 Respect for academic freedom has declined considerably over the past decade, according the Academic Freedom Index, a tool jointly developed by researchers from Friedrich-Alexander-Universität Erlangen-Nürnberg, the V-Dem Institute at the University of Gothenburg, and the Global Public Policy Institute, and Scholars at Risk.

“The deterioration of Hong Kong’s academic freedom should be alarming to researchers, educators, students, and university administrators around the world,” says Clare Robinson, SAR’s Director of Advocacy. “The backsliding we have seen over the past decade has quickly accelerated, endangering scholars’ and students’ freedom to ask questions or explore ideas, and tightening the government’s control over university affairs.”

According to data released today, respect for academic freedom in Hong Kong has continued to decline, dropping from 0.47, in 2019, to 0.35, in 2020, and is likely to keep dropping as the harmful effects of the NSL grow in 2021. The newest assessment puts Hong Kong in the second-lowest tier of countries and regions. China is in the bottom tier, with a score of 0.08.

SAR calls on Hong Kong and mainland Chinese authorities to immediately release scholars, students, and others who have been arrested and are being prosecuted under the NSL for peaceful, expressive activity; repeal or, at a minimum, revise the NSL to conform to international standards of academic freedom, freedom of expression, due process, and other fundamental human rights; ensure that university governance and disciplinary proceedings are free of political considerations; and promote the academic freedom and institutional autonomy of Hong Kong’s higher education community.

Short of this, according Ms. Robinson, “Hong Kong risks losing its standing as a vibrant place for world-class research, teaching, and the sharing of ideas, where students and scholars can innovate for everyone’s benefit.”

About Scholars at Risk: Scholars at Risk (SAR) is an international network of over 500 higher education institutions and thousands of individuals in over 40 countries that is leading the charge in protecting and offering sanctuary to threatened scholars and students. SAR’s mission is to protect higher education communities and their members from violent and coercive attacks, and by doing so to expand the space in society for reason and evidence-based approaches to resolving conflicts and solving problems. SAR meets this mission through direct protection of individuals, advocacy aimed at preventing attacks and increasing accountability, and research and learning initiatives that promote academic freedom and related values. SAR’s Academic Freedom Monitoring Project identifies and reports attacks on higher education to protect vulnerable scholars and students, hold perpetrators accountable, and prevent future violations. Institutions or individuals interested in participating in network activities are invited to visit www.scholarsatrisk.org or email scholarsatrisk@nyu.edu.