Over the past five years, academic freedom has been under immense strain in Thailand, where state authorities have used arrests, prosecutions (especially under the country’s lèse majesté law), surveillance, and other coercive actions to punish and restrict expression and inquiry by members of the higher education community. Scholars at Risk (SAR), in collaboration with the University of Turin International Human Rights Legal Clinic, expressed these concerns and a series of recommendations in a joint submission to the UN’s Universal Periodic Review of Thailand.

The submission details a pattern of wrongful prosecutions, surveillance, intimidation, and disproportionate force to prevent or punish nonviolent expression by student activists, scholars, and other members of Thailand’s higher education community. Of particular concern is Thailand’s lèse majesté law (Section 112 of the Criminal Code), which criminalizes defamation, insult, or threat to the monarchy. Authorities have charged at least 76 people under the law between November 2020 and March 2021, with several student activists currently detained on multiple lèse majesté counts, and denied bail. 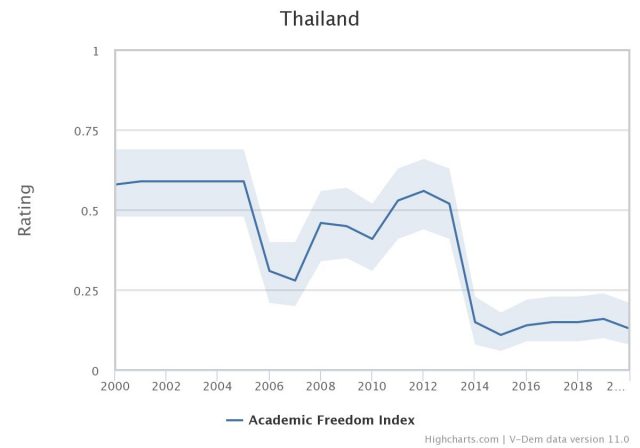 According to the Academic Freedom Index 2020 (AFi), a tool jointly developed by the Global Public Policy Institute (GPPi), the Friedrich-Alexander-Universität Erlangen-Nürnberg (FAU), the V‑Dem Institute, and SAR, Thailand’s higher education community suffers from severe or complete restrictions on academic freedom. When the NCPO, the military junta that ruled Thailand from 2014 to 2019, took power, respect for academic freedom in Thailand dropped from 0.52 in 2013 to 0.15, in the lowest tier of countries. Despite the March 2019 election and a transition away from military rule, Thailand’s AFi score in 2020 was 0.13, indicating no improvement in respect for academic freedom.

“This submission comes at a deeply perilous time for student activists and other members of Thailand’s higher education community, a growing number of whom face arrest, prosecution, and potentially lengthy sentences under the country’s lèse majesté law. The defendants in many of these cases have been denied bail and remain detained, with no indication that pressures will ease in the near future,” says Jesse Levine, Senior Advocacy Officer for Scholars at Risk. “Actions against the higher education community in Thailand are chilling academic discourse and threaten to continue doing so without immediate action by the international community.”

Read the submission below or download it here. For more information, please contact Quinn Coleman at qmc210@nyu.edu.