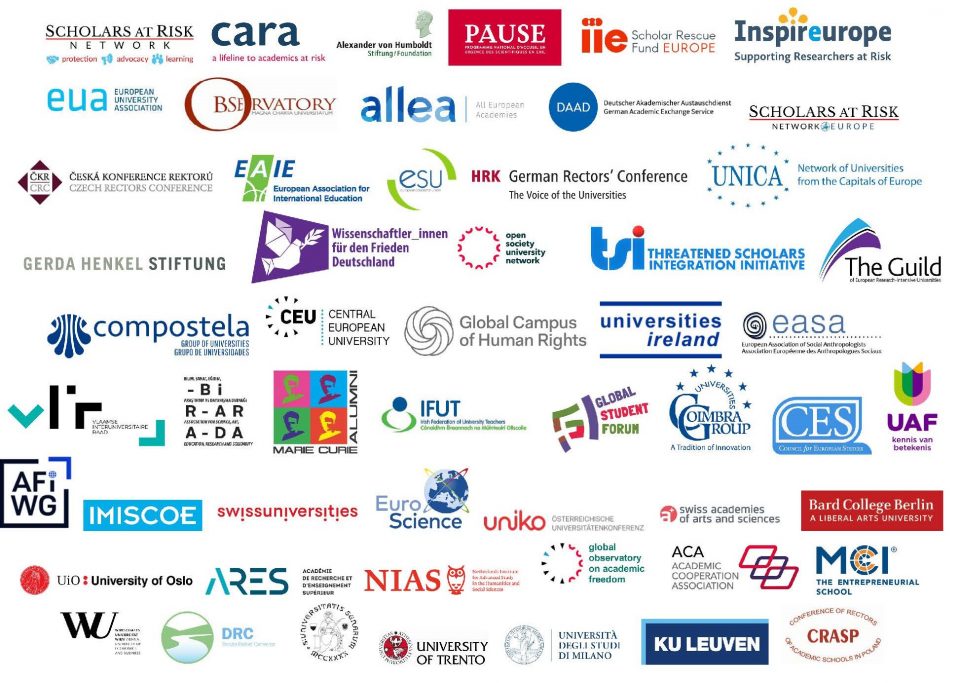 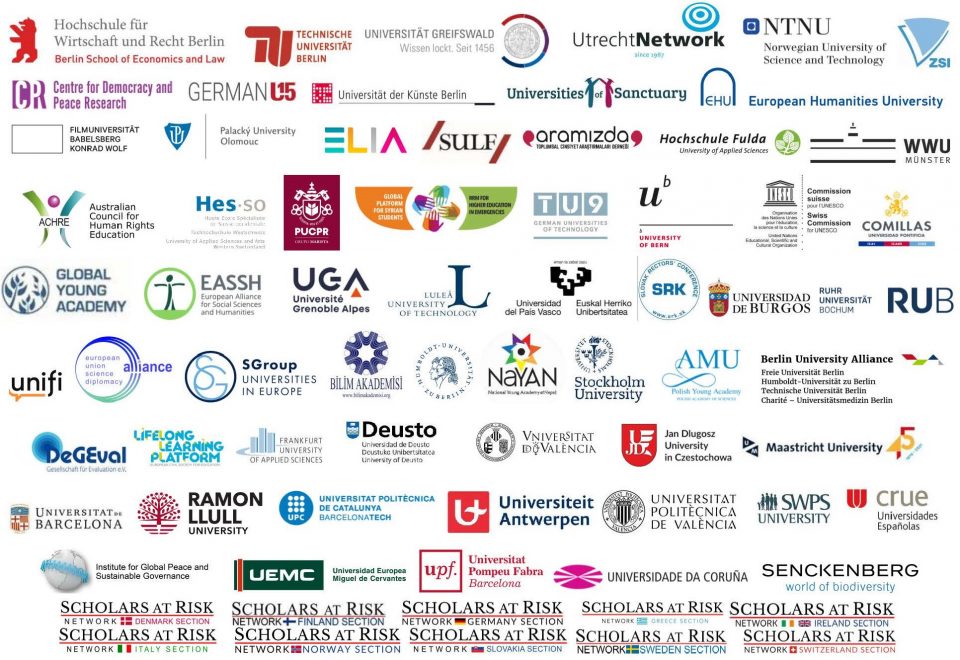 We, the undersigned higher education associations, networks, and leaders in the field of scholar protection, urge European governments and EU institutions to take immediate action to secure the lives and careers of Afghanistan’s scholars, students, and civil society actors.

Many of the undersigned organisations are leaders in the field of provision of support to researchers and scholars at risk. These include the Scholars at Risk Network (SAR), the PAUSE programme in France, the Philipp Schwartz Initiative of the Alexander von Humboldt Foundation, the Council for At-Risk Academics and the IIE’s Scholar Rescue Fund who arrange temporary positions at higher education institutions around the world for those who are unable to work safely in their home countries. European higher education institutions are at the forefront of these efforts: over the past two years, 80% of positions of safe haven arranged by SAR were in Europe.

Organisations supporting at-risk scholars are racing to offer assistance to researchers, scholars and civil society actors in Afghanistan who, at this moment, are desperately seeking ways to safety. For the better part of the past twenty years these scholars and civil society actors in Afghanistan have fought for a new, rights-respecting, forward-looking, knowledge-based Afghanistan. Many have worked for or in partnership with EU institutions, NATO partners, European governments and other international and civil society organisations. Hundreds travelled to Europe to seek an education and returned to their homeland, dedicated to values of openness tolerance and free expression. These are not the values of the Taliban, so their lives are now at risk. Timely government action can still make an enormous difference. We implore you to act on their behalf now.

Specifically, we seek immediate action from European Governments and EU institutions to:

The window in which to take these steps, save lives, and redeem some measure of Europe’s investment in Afghanistan’s future is rapidly closing. Your urgent intervention is needed to mobilize the relevant departments and agencies.

The eroding situation in Afghanistan poses a threat not only to the lives of our colleagues still in Afghanistan, but to the future of that country. The moral leadership of the European Union including its commitment to human rights, rule-of-law, and multilateralism, is needed now more than ever, and it is imperative to see those commitments put into practice at this time of crisis. The European higher education community is ready to do its part, but we need your help. If we move quickly, we can go a long way towards mitigating the worst of the threats and demonstrate continuing commitment to the future of Afghanistan and its people.

Endorsing Organisations as of January 19, 2022: 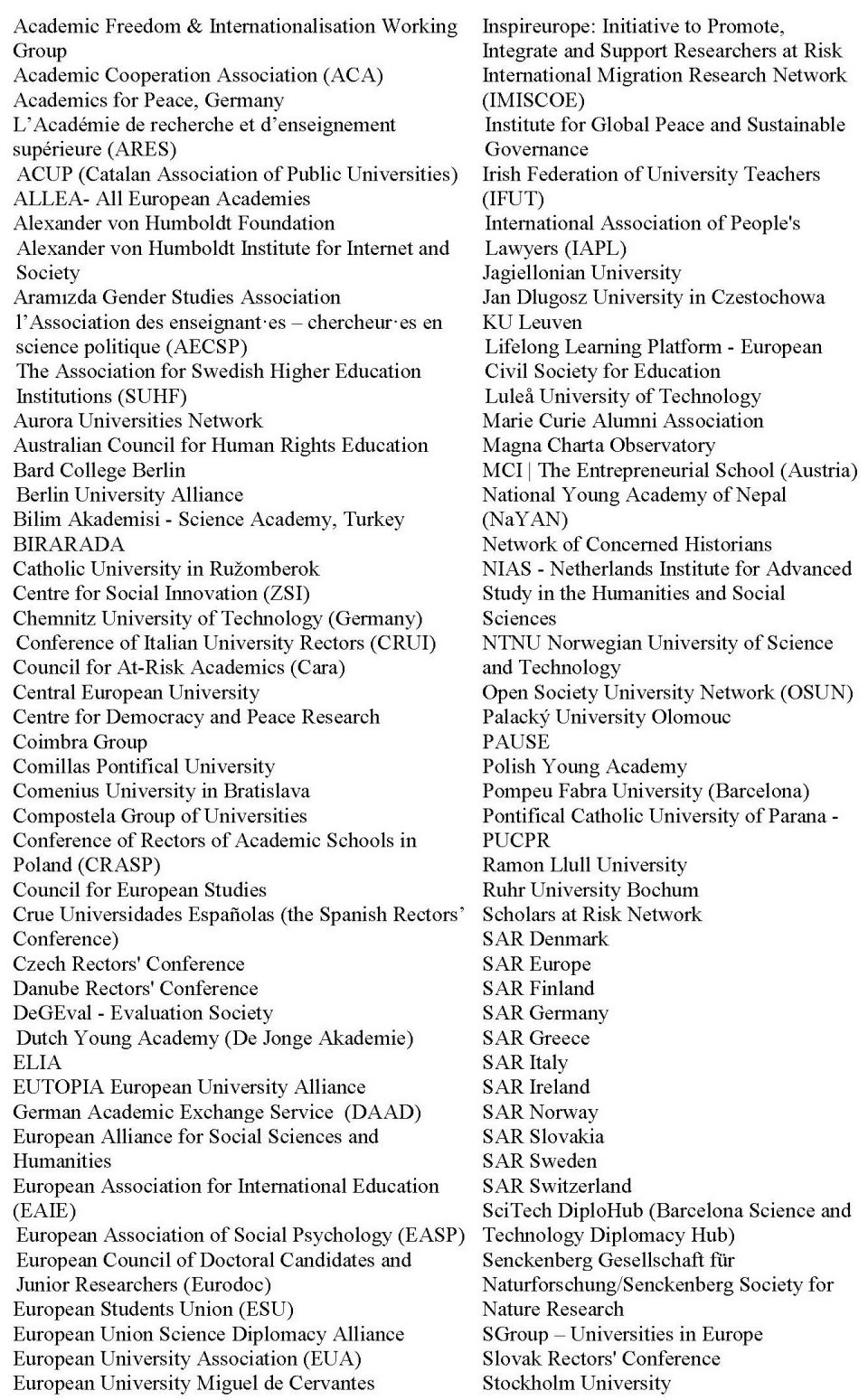 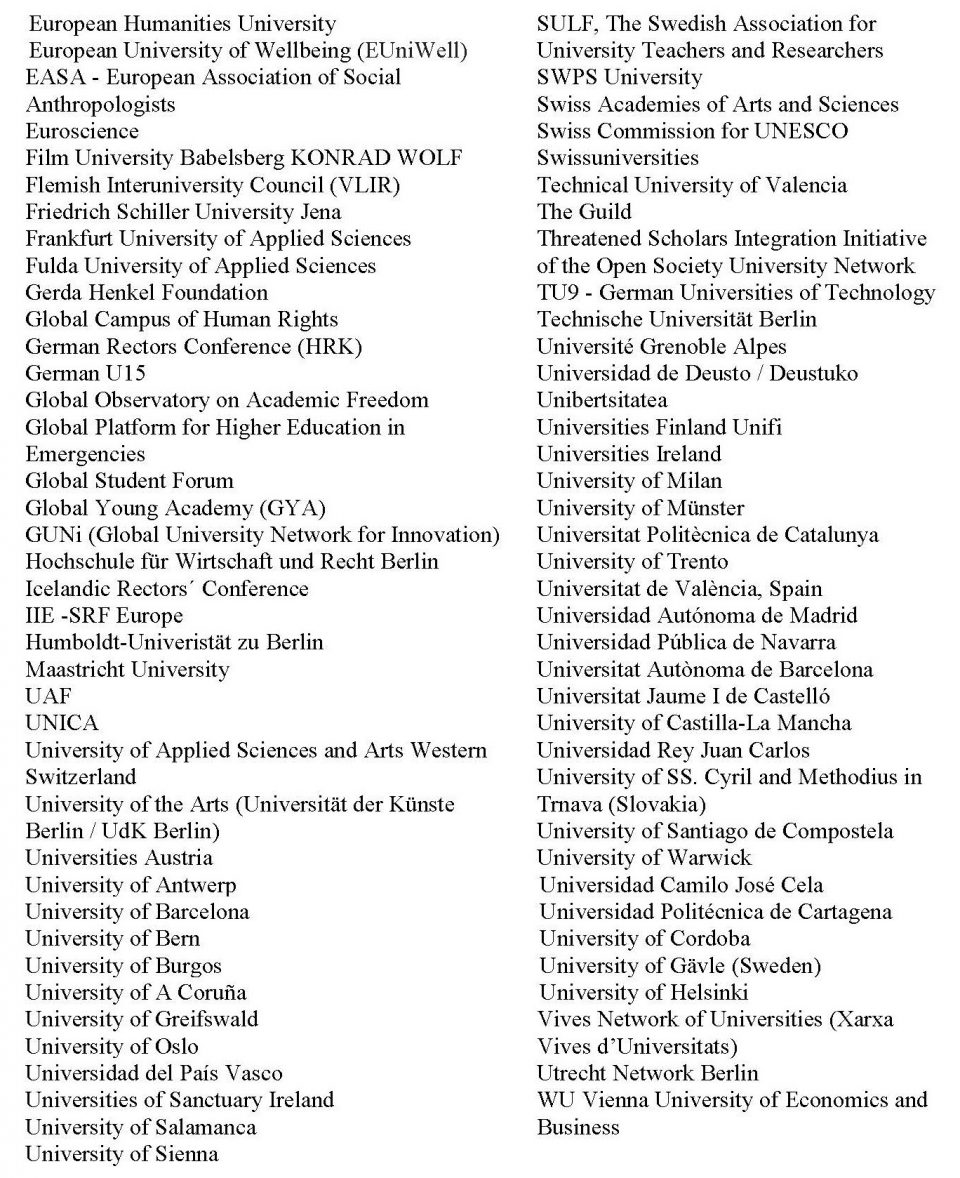 For more information and further action:

For higher education institutions: If your institution is willing to host at-risk individuals from Afghanistan, please complete the survey here.

Scholars at Risk is an international network of over 500 higher education institutions in 42 countries, including over 350 in Europe, whose core mission is to protect threatened scholars and intellectuals, principally by arranging temporary positions at network-member institutions for those who are unable to work safely in their home countries. Over the last 20 years our network has assisted over 1500 threatened scholars, students, and practitioners. SAR’s European office, based in Ireland, supports and coordinates activities of SAR sections in 12 European countries. SAR partners, notably the PAUSE programme in France, the Philipp Schwartz Initiative of the Alexander von Humboldt Foundation, the Council for At-Risk Academics and the IIE’s Scholar Rescue Fund, all leaders in the field of support to scholars, have also arranged positions for hundreds of scholars at European higher education institutions. For information visit www.scholarsarisk.org.