New York, NY — Scholars at Risk (SAR) urges governments, higher education leaders, and civil society to safeguard academic freedom and reverse the global phenomenon described in Free to Think 2021 of attacks on scholars, students, and their institutions. The report, released today, analyzes 332 attacks on higher education communities in 65 countries between September 1, 2020 and August 31, 2021. 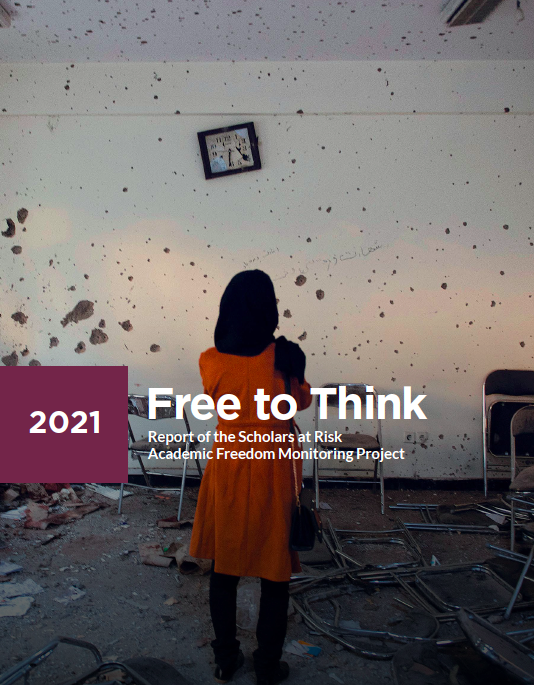 “Attacks on higher education are devastating scholars, students, and institutions around the world with life- and career-ending consequences,” said Robert Quinn, SAR’s founding Executive Director. “We are at a crisis moment: a surge of Afghan scholars seek refuge from the Taliban and the increasingly narrowing space for expression in Afghanistan, while lawmakers’ efforts in more open societies, including the United States, seek to restrict what can be taught in lecture halls. Free to Think exposes the nuances and trends found in these attacks and demands our resolve to protect academic freedom, quality higher education, and democracy itself.”

According to Free to Think 2021, over the past year, armed groups and individuals carried out severe, violent attacks on higher education communities. These included assassinations and attacks targeting entire campus communities in Afghanistan, where the Taliban now threatens to undo 20 years of higher education progress; armed raids on campuses in Nigeria, often in an attempt to abduct students and personnel; and the use of violent, often lethal force by soldiers and police against students and faculty protesting a military coup in Myanmar.

State authorities detained, prosecuted, and used other coercive legal measures against scholars and students. In Brazil, the Attorney General and a Supreme Court Justice filed complaints against a scholar for public speech criticizing their work. In India, authorities detained and prosecuted scholars and students under an anti-terrorism law for views that run counter to the ruling party. Hong Kong’s scholars and students continue to fear a far-reaching National Security Law imposed by Beijing that has triggered prosecutions, dismantling of student unions at major universities, and government-mandated courses promoting CCP propaganda.

Higher education officials suspended, fired, and otherwise disciplined faculty and students for their academic work and extramural activities. In Belarus, for example, Alexander Lukashenko ordered the suspension and dismissal of academics and students who protested his controversial declaration as winner of the 2020 presidential election.

Governments restricted academics’ and students’ freedom of movement through targeted actions, policies, and practices that frustrate the free flow of ideas across borders. China’s government issued travel bans against select international scholars, researchers, and institutions for their academic work. Meanwhile, Israel’s government continues to severely restrict academic the movement of Palestinian and international scholars and students.

Government officials and lawmaking bodies in a number of countries undermined the autonomy and academic freedom of entire higher education communities through the use of executive and legislative powers. Turkey’s president appointed a political ally as rector at one of the country’s top institutions, Boğaziçi University, prompting months of protests. In the United States, state legislatures advanced and passed bills seeking to ban areas of academic discussion—most notably, critical race theory—from being taught in classrooms.

Attacks on student expression accounted for roughly half of the reported incidents. Disciplinary measures, arrests, and prosecutions of students for nonviolent expressive activity and associations were especially prevalent in Bangladesh, the Occupied Palestinian Territory, Pakistan, South Africa, Thailand, and Zimbabwe.

“The frequency and global reach of these attacks should be alarming, not only to those in higher education, but to society at large,” said Clare Robinson, SAR’s Advocacy Director. “These attacks demonstrate a shrinking of the space for free inquiry and discourse. If we are to safeguard higher education’s unique ability to foster solutions to the most urgent problems of the day, governments, university leaders, and civil society must publicly demonstrate a commitment to prevent these attacks and promote academic freedom. We must reject violence aimed at punishing ideas, protect threatened scholars and students, and champion the freedom to think.”

To learn more about the report’s findings, join SAR on December 9, 2021 for “Free to Think 2021,” a virtual symposium marking the release of the report and featuring four sessions on academic freedom and higher education conditions in Afghanistan, Belarus, Myanmar, and the United States. At the conclusion of the symposium, SAR will present the 2021 Courage to Think Award to Dr. Ahmadreza Djalali, an imprisoned scholar of disaster medicine sentenced to death in Iran.

For questions about the report and requests for comment, please write to SAR’s Advocacy and Communications Assistant, Quinn Coleman, at qmc210@nyu.edu.

About Scholars at Risk: Scholars at Risk (SAR) is an international network of over 550 higher education institutions and thousands of individuals in more than 40 countries that is leading the charge in protecting and offering sanctuary to threatened scholars and students. SAR’s mission is to protect higher education communities and their members from violent and coercive attacks, and by doing so to expand the space in society for reason and evidence-based approaches to resolving conflicts and solving problems. SAR meets this mission through direct protection of individuals, advocacy aimed at preventing attacks and increasing accountability, and research and learning initiatives that promote academic freedom and related values. SAR’s Academic Freedom Monitoring Project identifies and reports attacks on higher education to protect vulnerable scholars and students, hold perpetrators accountable, and prevent future violations. Institutions or individuals interested in participating in network activities are invited to visit www.scholarsatrisk.org or email scholarsatrisk@nyu.edu.