NEW YORK, Nov. 8, 2022 — Scholars at Risk (SAR) has released Free To Think 2022, a report analyzing 391 attacks in 65 countries and territories, between September 1, 2021 and August 31, 2022. The report underscores the pervasive and urgent problem of attacks on higher education and urges governments, the academic community, and civil society to protect at-risk scholars and students and defend academic freedom. 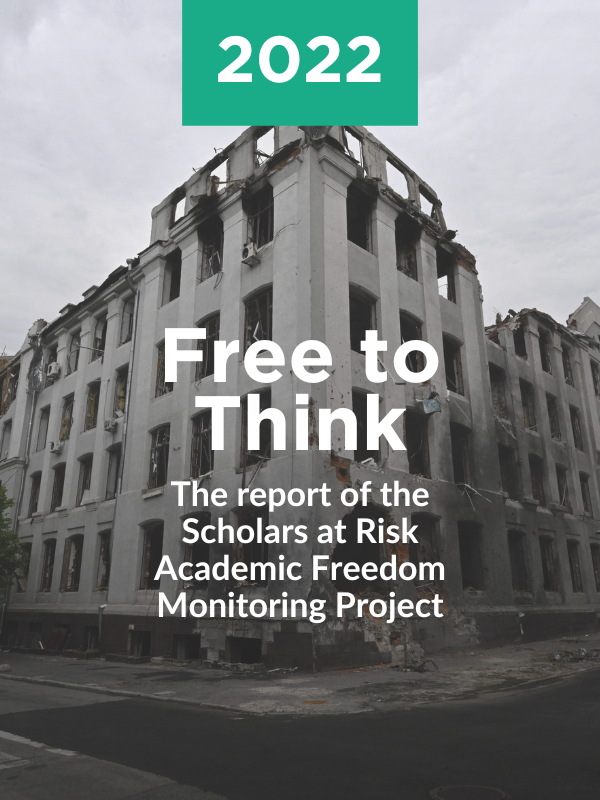 “Higher education communities around the world have suffered varied, ruinous attacks over the past year. They range from the Taliban’s repression of scholars and students in Afghanistan and Russian forces’ devastation of Ukrainian university infrastructure, to Israeli-imposed restrictions on academic travel to the West Bank and US lawmakers’ efforts to constrict discourse on campus,” said Robert Quinn, SAR’s founding Executive Director. “These attacks have deadly and career-ending consequences for scholars and students, but they also endanger society at large, by undermining higher education’s unique ability to drive the social, political, economic, and cultural progress from which we all benefit. These attacks must stop.”

The annual Free to Think report series is a product of SAR’s Academic Freedom Monitoring Project, which researches and raises awareness of attacks on higher education communities worldwide. In reviewing global and regional trends, including spotlights on 24 countries and territories, Free to Think 2022 notes with concern:

“Attacks on higher education communities are a distressing, global phenomenon that we see in Free to Think and the hundreds of requests for assistance we receive from at-risk scholars every year,” said Clare Robinson, SAR’s Advocacy Director. “This report highlights the problem, but, perhaps more importantly, it’s a rallying call and roadmap for governments, higher education communities, and civil society to reject attacks on the university space, redouble efforts to support at-risk colleagues, and promote academic freedom. We invite everyone to join the SAR community in this global fight for the freedom to think, question, and share ideas.”

Free to Think 2022 includes a Call to Action that encourages a robust response at the international and state levels, from within higher education itself, and from civil society and the public at large. These actions range from states monitoring and responding to attacks on higher education, including via international diplomatic channels, to university faculty and students campaigning on behalf of imprisoned scholars and students.

The formal launch of the report will take place on November 10, 2022, during the First Regional Conference on Academic Freedom in the Americas, organized by the Coalition for Academic Freedom in the Americas and hosted by Universidad de Monterrey, in Mexico. The report launch event will begin at 11:30 a.m. EST, and those interested in attending virtually can sign up here. More information about the conference program and speakers is available here.

For questions about the report and requests for comment, please write to SAR’s Advocacy Assistant, Ayodele Abinusawa at ayodele.abinusawa@nyu.edu.

About Scholars at Risk: Scholars at Risk (SAR) is an international network of over 600 higher education institutions and thousands of individuals in more than 40 countries that is leading the charge in protecting and offering sanctuary to threatened scholars and students. SAR’s mission is to protect higher education communities and their members from violent and coercive attacks, and by doing so to expand the space in society for reason and evidence-based approaches to resolving conflicts and solving problems. SAR meets this mission through direct protection of individuals, advocacy aimed at preventing attacks and increasing accountability, and research and learning initiatives that promote academic freedom and related values. SAR’s Academic Freedom Monitoring Project identifies and reports attacks on higher education to protect vulnerable scholars and students, hold perpetrators accountable, and prevent future violations. Institutions or individuals interested in participating in network activities are invited to visit www.scholarsatrisk.org or email scholarsatrisk@nyu.edu.