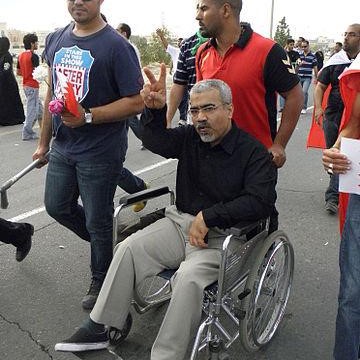 Dr. Abduljalil Al-Singace is a Bahraini scholar and a retired professor of mechanical engineering at the University of Bahrain, sentenced to life in prison. After participating in a pro-democracy protest in March 2011, authorities arrested Dr. Al-Singace and he has been imprisoned ever since. Dr. Al-Singace was previously detained from August 2010 to February 2011 after delivering a speech on human rights. On July 8, 2021, Dr. Al-Singace began a hunger strike to protest his ill-treatment in Jau Prison and to demand the return of a book that was in his possession to his family. Read more.

On August 13, 2010, Bahraini authorities arrested Dr. Al-Singace after returning from delivering a speech on human rights in the United Kingdom. Dr. Al-Singace was detained for six months and subjected to torture until a pardon by the king on February 23, 2011.

On March 17, 2011, after he participated in a pro-democracy protest, dozens of security officers raided Dr. Al-Singace’s home, arrested him, and took him to a police station where they allegedly beat and threatened him. Dr. Al-Singace was held incommunicado until June 22, 2011, when a military court sentenced him to life in prison on charges of “plotting to overthrow the government.”

Since his imprisonment, Dr. Al-Singace reports that his pre-existing health conditions, including post-polio syndrome, have worsened and new medical issues, including musculoskeletal issues, sickle cell disease, severe dehydration, fainting, shoulder infection, and two ruptured eardrums, have developed as a result of alleged ill-treatment and torture at Jau Prison. In March 2015, Dr. Al-Singace reportedly led a hunger strike that lasted for a total of 313 days to protest prison conditions. His family reports that, despite raising his health issues and requesting to see medical specialists, Dr. Al-Singace has not been provided consistent or appropriate medical care. Further, he has reportedly been banned from visiting fellow family members being kept at Jau Prison.

In November, authorities reportedly suspended Dr. Al-Singace’s access to weekly video calls with his family. Authorities continue to deny Dr. Al-Singace his medication, including pain relievers, a CT scan requested by a doctor, and an MRI on his head and shoulder. Dr. Al-Singace suffers from pain in his neck and back due to a dislocated disc in his lower back and a cervical disc, numbness and tingling in his body, and vertigo. In protest of his continued mistreatment in custody, Dr. Al-Singace has also refused to take IVs and vitamins. 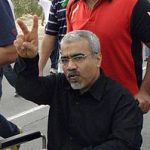 NGOs from the around the world call for the immediate release of prisoner of conscience Dr. Abduljalil Al-Singace on his 300th day of hunger strike.