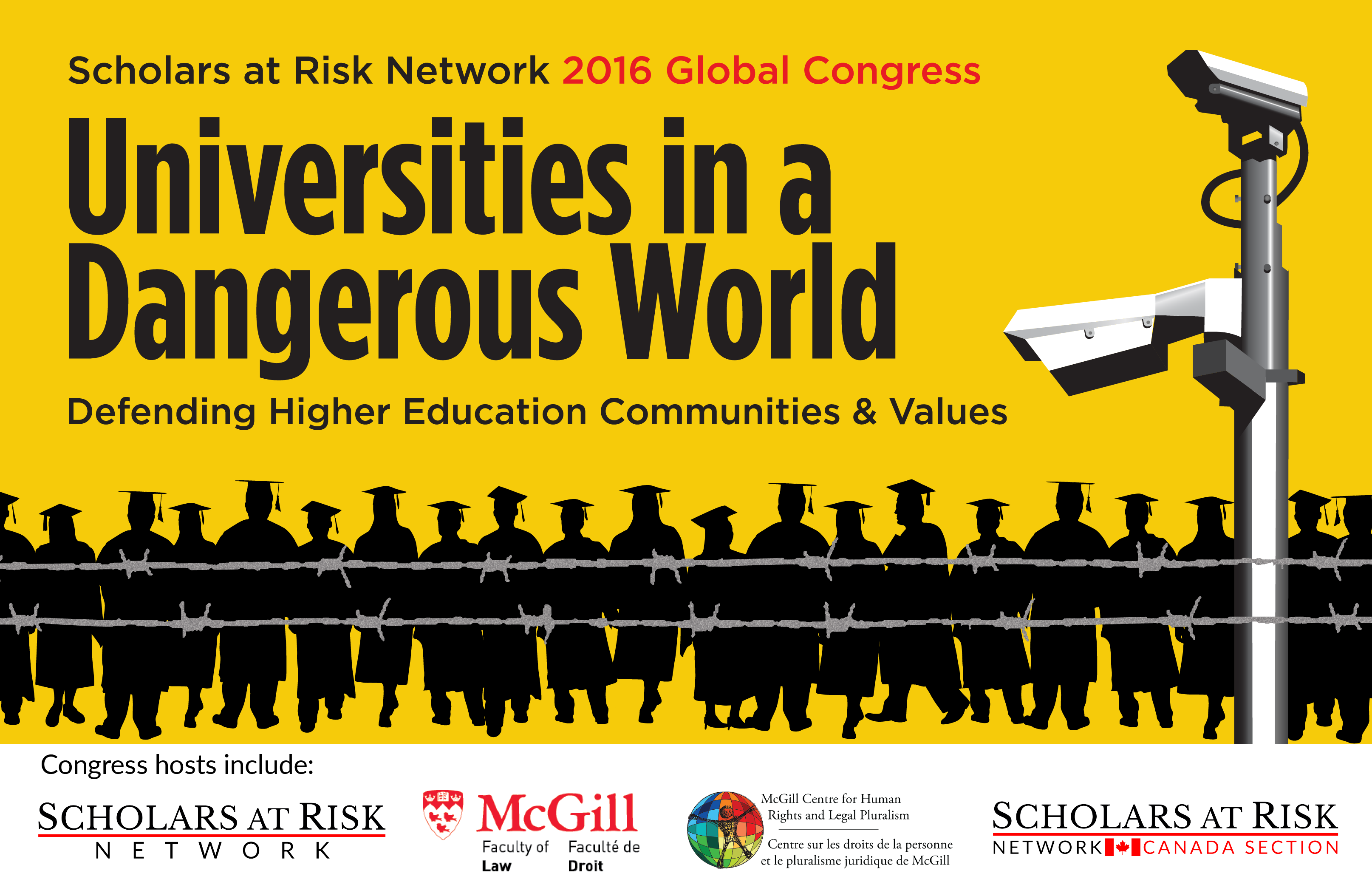 The SAR Network 2016 Global Congress will celebrate the 15th anniversary of the Scholars at Risk Network and the collective efforts of network members and partners protecting scholars and promoting academic freedom worldwide. Over the years, the network has grown from fewer than two dozen institutions to over 400 in 39 countries.

At the Congress, more than 200 university, government and nonprofit leaders, faculty, staff, students and advocates from 25 countries will come together to discuss seminal issues facing higher education today. Congress participants will discuss how to do more to protect universities and scholars in these challenging times, and to strengthen the capacity of the university sector to contribute to a more peaceful, just and sustainable world.

The 2016 Congress will provide global SAR network members—and prospective new members and partners—a special opportunity to engage with Canadian and other North American SAR members, as well as to enjoy all the cultural, historical and natural features that Montreal offers.

All events will be held at McGill University in New Chancellor Day Hall, except where noted.

Pre-Meetings and Workshops by invitation, contact SAR for more information

Lisa Anderson, a specialist on politics in the Middle East and North Africa, was most recently the president of The American University in Cairo, stepping down in December 2015. She previously served as dean of Columbia University’s School of International and Public Affairs.

Lloyd Axworthy is a Canadian politician, statesman, and academic. He served as Minister of Foreign Affairs in the Cabinet chaired by Prime Minister Jean Chrétien. Following his retirement from parliament, he served as president and vice-chancellor of the University of Winnipeg from 2004 to 2014 and is currently chancellor of St. Paul’s University College. He serves as Chair of the Scholars at Risk Ambassadors Council.

Jonathan Becker is the Vice President for Academic Affairs and Director, Center for Civic Engagement at Bard College. He is also an associate professor of political studies specializing in Russian and eastern European politics, media and politics, and education reform.

Nathalie Des Rosiers is a dean and professor of law at University of Ottawa, Canada, and a Fellow of the Royal Society of Canada. She is a well known constitutional law expert and previously served as the General Counsel for the Canadian Civil Liberties Association (CCLA).

Adam Habib is the vice-chancellor and principal of the University of the Witwatersrand in South Africa. He is an academic, an activist, an administrator, and a renowned political media commentator and columnist.

Emad Shahin is a visiting professor at Georgetown University and the editor-in-chief of The Oxford Encyclopedia of Islam and Politics. A prolific author, he has authored, co-authored and co-edited six books and has more than 50 scholarly publications.

Please note all rates are in $ CAD

We recommend Congress registrants make reservations at the Residence Inn Montreal Downtown and have arranged the following discounted rates for Congress attendees:

These rates do not include applicable taxes (3.5% hotel tax, 5% provincial tax, and 9.975% GST ).Please note that due to the high demand during Gran Prix weekend, hotel reservations for Thursday night are non-refundable. To make a reservation as part of the Congress block, please call Nayla Sultani, Sales Coordinator at the Marriott Residence Inn Montreal Downtown, at (514) 982-6064 and mention Scholars at Risk when booking.

McGill University has special arrangements with a few downtown hotels located within walking distance of the main campus. Guest rooms are available at reduced prices to anyone connected to the university: staff, students, visitors, etc. Mention McGill University when making reservations by phone.

Starting March 15, 2016, visa-exempt foreign nationals who fly to or transit through Canada will need an Electronic Travel Authorization (eTA).

Exceptions to this new eTA requirement include 1) U.S. citizens, and 2) travellers with a valid visa. Please note that U.S. permanent residents are not covered by this exception and will need an eTA to travel to Canada after March 15, 2016.

For more information on this new regulation and for general visa information, including visa processing times, please visit the Canadian Government’s Immigration Website.