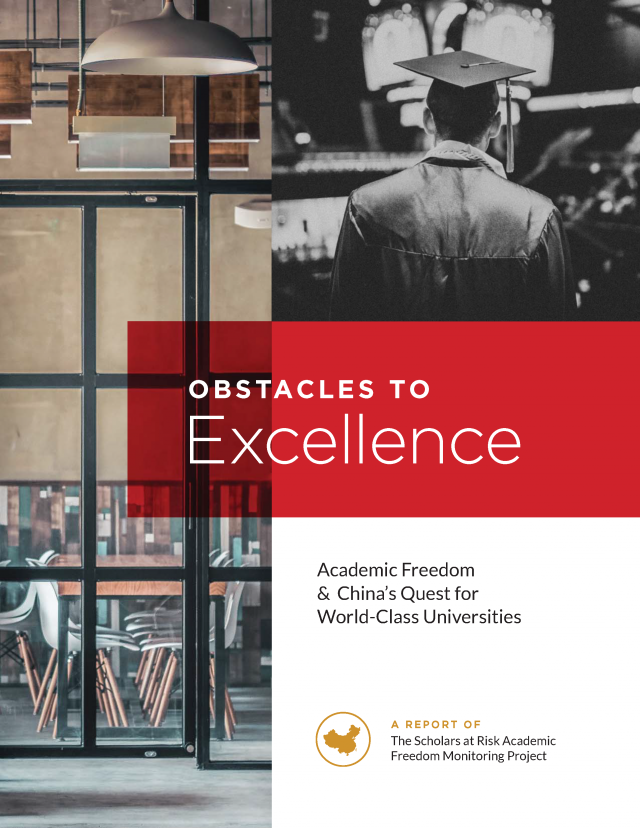 “For decades now, the Chinese government has invested heavily in academic institutions and programs designed to compete with the world’s finest,” says SAR executive director Robert Quinn. “This positive ambition is undermined, however, by state policies and practices that fail to protect academic freedom. This poses grave personal and professional risks for Chinese scholars and students,” as documented in the report, “and serious academic, reputational, and financial risks for foreign academic institutions with partnerships with Chinese counterparts, in China or abroad.”

Drawing on academic literature, legislative and regulatory texts, media, human rights reports, interviews with Chinese and foreign experts, and data from SAR’s Academic Freedom Monitoring Project, Obstacles to Excellence identifies pressures and threats to academic freedom in China and where China has extraterritorial academic connections, including:

● Systematic and targeted tactics employed by state and university authorities in mainland China to constrict academic activity and to intimidate, silence, and punish outspoken academics and students;
● Heightened pressures on scholars and students in the Tibet, Inner Mongolia, and Xinjiang Uyghur Autonomous Regions including language policies that limit equitable access to higher education, heightened surveillance, and the imprisonment of a growing number of minority scholars and students at so-called “re-education camps;”
● Erosion of university autonomy in Hong Kong and Macau under Beijing’s growing influence over China’s Special Administrative Regions;
● Academic freedom and autonomy challenges facing foreign higher education institutions operating joint ventures with Chinese universities on the mainland;
● Extra-territorial pressures by the Chinese Party-state and supporters, through Confucius Institutes and other activities, to restrict academic inquiry and expression at universities outside China; and
● Vague, unsubstantiated, and overbroad foreign government rhetoric and policies that impede academic inquiry and risk stigmatizing innocent overseas Chinese academics and students.

As noted in the report, a small but growing number of international universities have responded to academic freedom concerns by scaling back or terminating partnerships with institutions in mainland China and with PRC-supported institutes on their own campuses. Others have stayed out of the public dialogue. Obstacles to Excellence urges nuanced, public discussion of the issues, with the goal of identifying practices which recognize China’s legitimate higher education ambitions while fully protecting academic freedom.

“Pressures on academic freedom in China mirror those we see around the world, as documented in our annual Free to Think reports,” says SAR’s advocacy director Clare Robinson. “But given the size of its higher education sector, and China’s important and growing position on the global academic stage, it is more important than ever to discuss the issues raised publicly and to work together to institutionalize policies and practices that safeguard academic freedom and recognize its central role in world-class universities and scholarship.”

Obstacles to Excellence, available in English and simplified Chinese versions, invites readers to consider these important issues and to discuss them publicly, including at conferences, annual association meetings, and in international partnerships. It includes recommendations for Chinese state authorities, university leadership, and civil society in China aimed at strengthening understanding of and respect for academic freedom. It also urges state authorities, higher education leaders, and civil society outside of China to demonstrate their commitment to academic freedom by supporting at-risk Chinese scholars and students, wherever they may be, and by ensuring that their international partnerships—with Chinese and non-Chinese partners alike—respect academic freedom and other core university values.

JOIN SAR: Higher education institutions are invited to inquire about SAR’s work and about joining the SAR network by visiting https://www.scholarsatrisk.org/join/ or emailing scholarsatrisk@nyu.edu.