Since 2016, the higher education community in Hungary has faced escalating government pressures, in particular severe encroachments on university autonomy, including most prominently the government’s targeting and effective closure of a university. Scholars at Risk (SAR), in collaboration with the Ghent University Human Rights Centre Legal Clinic, expresses concerns over these pressures in a submission to the United Nations’ Universal Periodic Review of Hungary.

Among the most notable issues raised in SAR’s submission is the closure of Central European University’s (CEU) main campus in Budapest. In 2017, Prime Minister Victor Orban signed an amendment to the country’s National Higher Education Act that appeared to target CEU specifically—imposing onerous restrictions that affected CEU alone—and ultimately forced CEU to move its major operations out of Hungary to Vienna, Austria. Additional newly-passed laws and regulations effectively place other academic institutions, including the Hungarian Academy of Sciences and the University of Theater and Film Arts, under the control of the government or its allies. Further, a recent government decree eliminates entirely gender studies programs at Hungarian universities. Closures and takeovers of universities, and restrictions on curricula, impact not only the institutions and programs targeted but the entire Hungarian higher education community.

According to the Academic Freedom Index (AFi), a tool jointly developed by the Global Public Policy Institute (GPPi), the Friedrich-Alexander-Universität Erlangen-Nürnberg, the V‑Dem Institute, and SAR, Hungary’s higher education community suffers from moderate to severe restrictions on academic freedom. In 2010, the same year the current Prime Minister took office, respect for academic freedom in Hungary dropped significantly from 0.96 to 0.65. Hungary’s AFi score has continued to decline and in 2020 dropped to 0.44 (the middle tier). 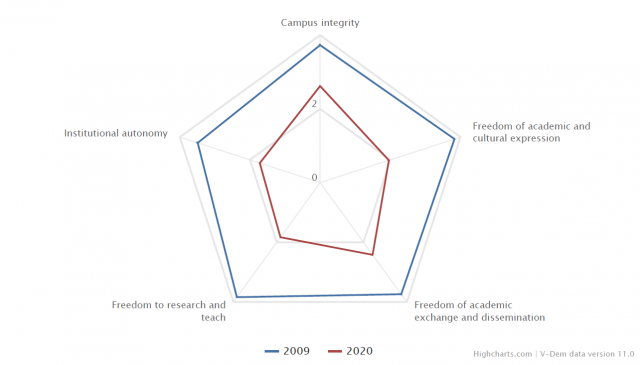 According to the Academic Freedom Index (AFi), all five indicators that, together, measure respect for academic freedom have recorded drastic declines in Hungary since 2009. Learn more about the AFi: https://www.gppi.net/2021/03/11/free-universities.

“As we’ve seen elsewhere in recent years, attacks on universities and restrictions on academic freedom in Hungary have proved a harbinger for broader democratic decline,” says Jesse Levine, Senior Advocacy Officer for Scholars at Risk. “The immeasurable impacts of the loss of CEU — together with other, ongoing pressures frequently driven by populist attacks — threaten to compound the harm to Hungarian universities, and undermine both future scholarship and democratic renewal.”

Ahead of the review, scheduled for November 2021, SAR urges UN member states to call on Hungary to reverse the present course, which has proved deeply harmful to the university space, including by: (1) implementing an October 6, 2020 decision by the European Court of Justice ruling that Hungary’s laws concerning CEU were incompatible with EU law and related international commitments by Hungary; (2) ensuring the protection of scientific freedom and autonomy of research institutes; (3) respecting the principles of non-discrimination in the application of laws on higher education; (4) ensuring new policies do not interfere with the international work of academics and institutions; (5) aligning national legislation with international standards; (6) affirming Hungary’s commitment to university autonomy and equitable access; and (7) reversing policies that restrict gender studies, which may violate Hungary’s international obligations, including under the Convention on the Elimination of all forms of Discrimination Against Women (CEDAW).