Beginning with the 2018 presidential campaign and election of President Jair Bolsonaro, Brazil’s higher education community has faced dramatically increasing threats to academic freedom and institutional autonomy. The government has increased control over the university space by cutting funds to universities on ideological grounds and controlling the appointments of university leaders. Scholars at Risk (SAR) expresses concerns over these pressures in a submission to the United Nations’ Universal Periodic Review of Brazil.

According to Jesse Levine, Scholars at Risk’s senior advocacy officer, “the sharp increase in pressures on Brazilian higher education is a stark reminder that, when authoritarianism takes hold, academic freedom is not just ignored and left unprotected—it is actively targeted. Universities are seen as a threat to those in power, who then do what they can to remake universities in their own image.”

Among the most notable issues raised in SAR’s submission are government encroachments on university autonomy and academic expression. In 2019 and 2020, President Bolsonaro issued several provisional measures (PMs) intended to expand his authority over the university rector appointment process, including giving himself the power to freely pick a rector from three candidates and attempting—unsuccessfully—to give the Minister of Education complete authority to designate rectors and vice-rectors at federal universities. Furthermore, Bolsonaro and his government led criminal investigations against academics who publicly criticized the president and members of his government. In one case, the former rector of Federal University of Pelotas was made to sign an agreement, prohibiting himself and a colleague from criticizing the president at university events. 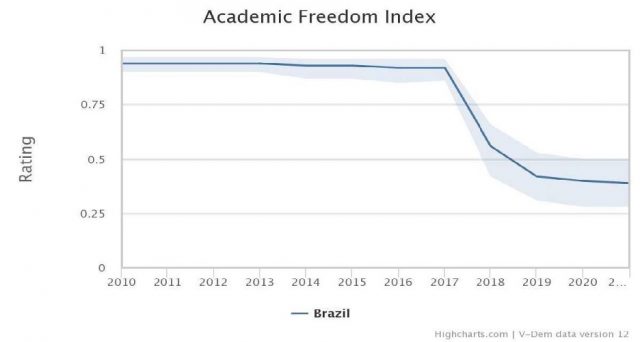 This pattern of increased government intervention in the higher education space was part of a precipitous decline in academic freedom overall in Brazil during this review period. Indeed, according to the most recent update of the Academic Freedom Index (AFi), which assesses the level of respect for academic freedom in 175 countries and territories based on surveys of more than 2,000 country experts around the globe, Brazil is one of four countries (alongside Hong Kong, India, and Turkey) worldwide that “saw the greatest declines in academic freedom between 2011 and 2021.” From 2017 to 2019, amid the presidential campaign and election of President Bolsonaro, respect for academic freedom in Brazil dropped significantly from one of the highest AFi levels (see chart above).

According to Catalina Arango, one of the leaders of the Coalition for Academic Freedom in the Americas, a new regional initiative aimed at promoting and protecting academic freedom of which SAR is a member, “the increase in pressures on Brazilian higher education in recent years signals the need for a hemisphere-wide effort to implement strong legal protections for academic freedom, and to promote academic freedom at all levels–in universities, national governments, international institutions, and societies generally.”

Ahead of the review, scheduled for November 2022, SAR urges UN member states to call on Brazil to reverse its present course, which has proved deeply harmful to the university space, including by: (1) establishing clear, transparent, and uniform standards for the appointment of university leadership that ensure the power to appoint and oversee university leadership lies with academic communities; (2) refraining from attacks on academic expression or other nonviolent expressive activity by scholars and students; (3) ensuring the safety and security of higher education communities; and (4) drafting legislation to ensure that protections for academic freedom under the Brazilian Constitution—particularly Articles 206 and 207—are consistent with relevant international standards.