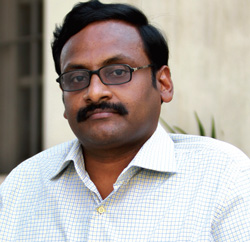 Professor Gokarakonda Naga Saibaba is a professor and human rights activist wrongfully convicted and sentenced to life in prison. Professor Saibaba is a scholar of English literature at Delhi University who has engaged in human rights activism on behalf of vulnerable populations in India, including tribal groups who suffer from poverty and human rights violations due to the prolonged conflict between India and the separatist Communist Party of India (Maoist), also known as CPI (Maoist). Professor Saibaba has been denied access to medical care despite ongoing medical complications. Read more.

Professor Saibaba suffers from post-polio syndrome, which inhibits the use of his legs. Since his arrest, his health has deteriorated at an alarming rate. In addition to his disability, Professor Saibaba is suffering from 19 health issues, including life-threatening acute pancreatitis and impacted gallbladder stones, both requiring surgery immediately. He has further described cardiac complications, hypertension, and, according to a recent letter, has been frequently feverish, falling unconscious, unable to sleep due to shooting pains in his left hand and left leg, and suffering from severe urinary pain.

On October 14, 2022, the Bombay High Court ordered Professor Saibaba released based on a procedural lapse during his prosecution. The following day, however, the Supreme Court granted an appeal by the government of Maharashtra and suspended the ruling.