Scholars at Risk has called on Egyptian authorities to drop all charges against Dr. Ismail Serageldin, an internationally renowned scholar librarian and former director of the Bibliotheca Alexandrina (BA).

Dr. Serageldin was sentenced to a three-and-a-half-year prison sentence on July 31, 2017, on apparently politically motivated charges related to “negligent management” of the BA. SAR’s letter can be found below and for download.

RE: Drop charges against Ismail Serageldin

I write on behalf of the Scholars at Risk Network to express grave concern over the sentencing of Ismail Serageldin, an internationally renowned scholar and librarian, to three and a half years in prison on apparently politically motivated charges related to “negligent management” of the Bibliotheca Alexandrina (BA). Scholars at Risk respectfully asks that you urge the appropriate authorities to drop all charges against Dr. Serageldin, or, at a minimum, to reduce his sentence, which appears severely disproportionate given the charges.

Scholars at Risk (SAR) is an international network of more than 500 universities and colleges in 37 countries dedicated to protecting the human rights of scholars around the world and to raising awareness, understanding of, and respect for the principles of academic freedom and its constituent freedoms of expression, opinion, thought, association, and travel. In cases like that of Dr. Serageldin, involving alleged infringement of these freedoms, Scholars at Risk investigates hoping to clarify and resolve matters favorably.

Dr. Serageldin is a former Vice President of the World Bank, advisor to Egypt’s Prime Minister on culture, science, and museums, and the founding director of the BA. As director, Dr. Serageldin led the development of the BA into an active, modern center for academic inquiry in Egypt. As a result of this distinguished career, 90 Nobel prize winners and 20 heads of state have expressed their support for Dr. Serageldin.

SAR understands that, following the 2011 revolution in Egypt, a group of BA librarians and other employees submitted to public prosecutors over 100 accusations of criminal acts against Dr. Serageldin, including allegations of corruption and money laundering. In 2012, the prosecutors dropped all but three of the charges of “negligent management,” which were referred to an administrative court. The remaining charges relate to allegations that some full-time BA employees were paid without sufficient work assignments; that Dr. Serageldin had misguided BA’s Board of Trustees into agreeing to refund employees’ contributions to a life-insurance policy he had cancelled; and that he had negotiated the rental of cafeteria spaces at BA, rather than using an open bidding process.

After the prosecution presented the administrative court with a report in March 2017, the judge ruled to convict Dr. Serageldin on July 31, 2017. Such convictions typically result in a monetary fine; however, in Dr. Serageldin’s case, the judge imposed a three-and-a-half-year prison sentence. SAR understands that Dr. Serageldin has appealed the conviction and sentence.

We welcome any additional information that may explain these events or clarify our understandings. Absent this, the facts as described suggest that Dr. Serageldin has been prosecuted, and subject to a disproportionate sentence, in apparent retaliation for the peaceful exercise of the rights to academic freedom, freedom of expression, and freedom of association—conduct which is expressly protected by international human rights instruments including the Universal Declaration of Human Rights and the International Covenant on Civil and Political Rights, to which Egypt is a party.

We therefore respectfully urge you to take any available measures to ensure that authorities drop the charges against Dr. Serageldin, or to otherwise reduce the sentence he currently faces. Pending this, we respectfully urge you to ensure that Dr. Serageldin’s appeal proceeds in a manner consistent with Egypt’s obligations under international law, including internationally recognized standards of due process and fair trial.

April 10, 2019 | New York, NY — Scholars at Risk (SAR) and the Association for Freedom of Thought and Expression in Egypt (AFTE) have filed a joint submission with the United Nations’ Universal Periodic Review (UPR), highlighting attacks and 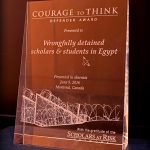 On June 9, Scholars at Risk presented the 2016 Courage to Think Defender Award to Egypt’s wrongfully detained students and scholars, in recognition for their commitment to exercising the right to think, share and question ideas despite tremendous risks. The